How to Create a Professional Image in Social Media and Online

by Marianne Wilman, Founder/Principal of ScreenPresence

If a professional photographer is responsible for the images you use on your social media profiles, that was probably a smart move. You’re also in a tiny minority.

Most people find a photo taken of them by a friend, family member, or even a smartphone “selfie” shot that they don’t absolutely hate, and use that image. Others might go for something arty or mysterious, but it may not be eliciting the intended response.

Here are some tips for improving your social media profile images, and presenting a professional image of yourself online:

Most profile pics could do with some image editing help, such as brightening, cropping and color correcting.  Rules of thumb include being able to see your eyes and avoiding the bobblehead look by including at least your shoulders. So, if you’re not ready for a new image you might start by re-working the one you already have.

However, if you are ready to hire a photographer to capture a picture of you for your website or your social media profile there are several things to consider. It’s easy to imagine that you’ll show up looking your best and the photographer will do the rest. That’s one approach, and you may get the result you’re looking for, especially if you’ve chosen a photographer for a specific shooting style.

On the other hand, if you’re going to be working with a photographer who has come recommended but you know little about, figure out what you really like for a self-portrait so that you can communicate your preferences in advance.

Take a look at photographs of other people on their company websites or on LinkedIn and consider the following:

It’s possible to pick and chose. You may be a company owner who prefers a standing, posed image taken on a beach with a soft background. Or you may be a manager who relates to professional looking images taken under studio lights with abstract backgrounds.

Take a look around and observe what you’re drawn to. This will inform the conversation you’ll have with your photographer about the location for the shoot. “People are more particular about what they like and don’t like than they want to believe,” says Screen Presence photographer Stefanie Atkinson.

Recently we worked with a client, Ronda, who was interested in an updated headshot. Ronda had previously been an actress and a singer but has for many years been working very long hours in Learning and Development at a Fortune 500 company. It’s a job she’s great at, but she was ready to re-capture her inner creativity and project her more theatrical side back out into the world.

In the pre-shoot call with Screen Presence photographer Stefanie Atkinson and hair & makeup pro Sarah E. Hyde we discussed the feel for the image. Ronda’s keywords for the shoot were “inviting,” “magnetic,” and “twinkle.”

Here’s Ronda, before and now: 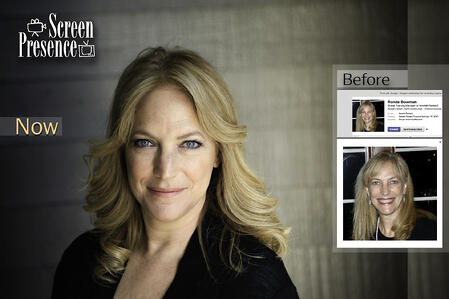 Ronda looks great in both the before and after images! So, what’s the real difference here?

Sarah says that in the “Before” image Ronda doesn’t look professional, “It looks more like she’s just had a cocktail with friends!” Ronda’s hair is flat, her lips are shiny. In the “Now” image we’ve smoothed out her hair and gone with a modern looking blowout. In terms of makeup, Ronda looks clean, fresh and dewy. Sarah enhanced Ronda’s best feature, her eyes, framing and defining them but not overpowering them, and she went with a matte lipstick. With her mouth closed Ronda is more serious, and she looks friendly, warm and approachable. “There’s more depth and self confidence in the new image,” Sarah says.

Stefanie notes that the lighting in the Before image is flat and the image has been taken with a flash: “There’s glare on her lip, nose and face and there are bars behind her head. It’s not a professional image,” Stefanie says. “There’s dimensionality, depth and warmth in the Now image. The eye goes directly to her, and it feels like she’s really looking at me.” The cleaner background, softer lighting and hair and makeup also accentuate Ronda’s beauty.

“I feel like you captured the real me… it is so reflective of me, both inside and outside,” says Ronda.

Creating the right image of you may be as simple as editing a photo you already have. Or it may be time to go further and have an image made by a professional photographer skilled at capturing the essence of you. It’s easy to lose oneself in the business world, so honor yourself with an image that represents who you are now.

For more information, visit Screen-Presence.com. If you're interested in a headshot consultation, or a full business makeover for 2015, contact Marianne at bizpresence.gmail.com